An Emporia mom expresses her gratitude to Josey, Leslie, and Juanita, for their care during the birth of her first child 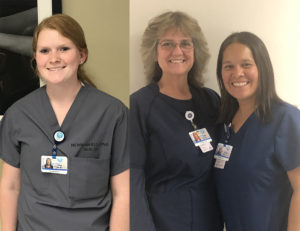 “I wanted to share with you my experience in the labor & delivery unit at Newman and acknowledge some very key people who made the process a great one.

I came in for my regular 40-week appointment on June 25 and ended up being sent for induction due to fear of cholestasis. Upon arriving at the labor and delivery area, I was welcomed by a couple of different nurses who helped me get set up. There was a shift change that occurred at 7, and they introduced me to my new nurse for the delivery process, Juanita.

Juanita instantly jumped in and helped me find alternative positions to make it through some of the pains; I had told her I’d like to try to avoid the epidural if possible, which she didn’t challenge at all.

Throughout the first several hours, she served as a pillar of confidence for me. She made me feel much less fearful about the hard parts left to come and encouraged me throughout.

By the time I was at 4 cm, I decided to go for the epidural. She didn’t push it on me at all, but when I asked for it, she acted immediately to get the anesthesiologist en route. He was equally great, telling me all the liabilities at the speed of lightning when I’m sure he could tell I didn’t care about anything he was saying while I was going through contractions. My contractions were very close together at that point and somehow he was able to get the epidural done between two of them. It was instantly effective.

As things progressed, Juanita called Dr. Faulkner to come in for delivery. Around the time Dr. Faulkner arrived, so did a new nurse, Leslie. The three of them, alongside my husband, helped me through the last of it and brought my new son, into this world.

After a little skin-to-skin, the nurses got me cleaned up and wheeled me on back to our room. I was absolutely exhausted. Leslie offered to take Bo for a while so we could get some sleep, and I gladly accepted that offer. She would bring him back to try to feed, then take him back with her so we could get rest.

We had several different nurses along the way (one of which was a new nurse, Josey, who did an EXCELLENT job for her second week on the job!); some were helpful, others not so much, but I found myself looking forward to the times that Juanita and Leslie were working. Literally, I felt as comfortable with them as I did with my own mom by the end!

We’ve now been home for a few days and are adjusting to life without night nurses to take my son while we sleep. Let’s just say there have been a couple of nights that I’ve wondered if they’d be willing to babysit!

I just wanted to share all of this with you, and I hope that they get acknowledged for their quality of work. Entering into my third trimester as a first-time mom, I was pretty anxious about labor. People are great at sharing the horror stories so that’s what I expected. When it was all said and done, though, I would truly consider it a euphoric experience. So much so that I told my husband I want to have a whole army, we’re just going to need to know Juanita and Leslie’s schedules in advance so we can time conception accordingly